Stand up for your rights

Malta Women's Lobby Acts as a national forum to discuss and highlight issues on women’s rights leading to concrete recommendations, conclusions and actions to ensure equality between women and men; Disseminates best practices in the field of women’s rights in order to guarantee equal opportunities; Contributes towards an improvement of national policy and strategy vis-à-vis women’s issues; Improves the co-operation between policy makers, NGO’s and others working in the field of women’s issues Informs, links and raises awareness, among women’s organisations, on European issues; Works directly with European institutions to ensure that women’s needs and perspectives become an equal and integral part of European policies; Keeps members updated on national and EU directives, regulations and legislation regarding women’s issues including gender budgeting and gender mainstreaming.

‘I was raped 15 months ago. I have yet to be questioned by police’

The MWL is a full member of the European Women’s Lobby (EWL) https://womenlobby.org

January 11th is National Human Trafficking Awareness Day. A perfect opportunity to listen to survivor leaders in this space to learn about the reality compared to the hyper-sensationalized and misinformed pieces of information we tend to get on the internet.

Call to champion women's rights in the reform on prostitution.

This week it was reported in the media that you are working on the prostitution reform (https://www.independent.com.mt/articles/2023-01-09/local-news/Government-in-process-of-amending-prostitution-legal-reforms-6736248727). In the past we were totally excluded form the technical committee working on this reform, and we would not like this to happen again under your watch. For this reason, we felt the need to ask you to prioritse women and girls in this reform in line with the wishes of all women's organisations and key experts in Malta on this matter.

We would like to start with the obvious in noting that the overwhelming majority of persons in prostitution in Malta are women, and research repeatedly shows that they are all, bar a few exceptions, victims of coercion, be it financial, emotional, or physical.

In principle, we agree entirely with government support for sustainable exit programs, as well as the implementation of concrete measures that ensure that persons in prostitution are not re-victimised by prosecution. However, it must be stressed that the prevention of exploitation may only be effective if the buying of sex is outlawed and penalised accordingly.

Fully decriminalising legislation supports, to a limited extent, a very small minority of individuals, whilst simultaneously exploiting the majority of victims. It also opens Malta’s doors to sex tourism and human trafficking, enabling such criminal behaviour, and exposing Maltese and foreign women and girls to unprecedented levels of risk and harm.

With the exception of two organisations - which are not experts on the subject - ALL 46 organisations which participated in the consultations process and eventually formed part of the Coalition, strongly advised that to promote gender equality and curb sex trafficking, the new legislation must limit, not expand, demand for sexual services. This was also the position taken by the National Commission for the Promotion of Equality (NCPE).

To be true to your word that “amendments to the law are currently underway to ensure that the proposals put forward correspond to the local context”, it is your representational duty to listen to and follow the advice of Malta’s experts. A consultation is a crucial process and must not be merely reduced to a hollow PR exercise.

To do otherwise would mean consciously putting vulnerable persons in a much worse, not better, position, and would result in risking the lives of women and girls, whilst protecting those who exploit them.

We strongly urge you to champion women's rights and to protect the most vulnerable, many of whom have no voice in this debate, and depend on their representatives to protect their interests and not the interests of those who are exploiting them.

We also expect that this matter is discussed in the Consultative Council for Women's Rights and with you before the law is presented in parliament.
View on Facebook

GOALSCORE intends to use football to fight gender violence among young female adults; this is just its kick-off. We'll update you in the next three years on our work, activities, and progress.

Visit our video on youtube (https://www.youtube.com/watch?v=KjTFxWU5F7U) and our webpage (https://projectgoalscore.com/)

Violence against women remains a major social problem, worldwide and across the EU. In an effort to take active prevention, GOALSCORE and its partners believ...
View on Facebook

Malta Women's Lobby - MWL
Yes, we are so late for the 16 Days of Activism, but we were taking action.

So shocked by the loss of another sister and all our activities around our 10th Anniversary.

We have been delivering Triple R Therapeutical sessions for women who want to understand why they have been through domestic violence, how to recognize domestic violence, how to recover, how to support their children, and how to become resilient. If you wish to benefit from these online sessions within a group, do not hesitate to contact us. Next group starting the end of February. Book your place by sending an email with your contact details to soar@antidemalta.org

This is one of the ways how we will be educating survivors in 2023.

This artwork was created by the brave Artist @Marisa Attard, and the messages is generated from quotes Survivors have shared with us.

If you wish to donate toward our vision, please do so on:
https://www.antidemalta.org/donate1.html

MOTHERS AT THE MERCY OF THEIR PERPETRATORS

Yet again another story in our newspapers (https://timesofmalta.com/articles/view/my-baby-doesn-t-exist-mother-flags-legal.999349) which highlights the multiple problems and hurdles women, and especially mothers, face on a regular basis in our patriarchal society.

This is not a rare coincidence, and women experiencing violence go through similar problems over and over again on a daily basis. For example, mothers have to get the signature of their abuser for anything related to their children, be it enrolling them into childcare or extra curriculum activities; changing their school or issuing/updating their passport, and even if they want their children to receive therapy. And if the abusive father wants to create problems and refuses to consent, the mother and the children suffer the consequences. Alternatively, the mother has to file a court application which can run into hundreds of Euros to try and resolve the issue.

This, and many similar stories suggest that many of our laws work against women and continue to uphold and sustain the patriarchy at the expense of women. They do not reflect modern society. One wonders what is stopping the government from changing such laws and updating them to ensure that abusers do not have the upper hand. Or is this too much to ask because women do not really matter in this country?
View on Facebook
● Majority of Maltese believe that prostitution should not be legalised or decriminalised
● Increase of sexual violence feared if prostitution is legalised
● Messagg biex il prostituzzjoni ma tkunx legalizzata newsroom promo
● Il maltin huma kontra l ftuh ghall prostituzzjoni jemmnu li din twassal ghal kriminalita organizzata 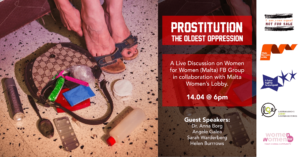 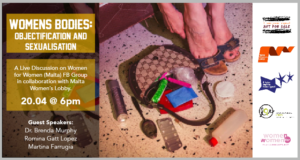 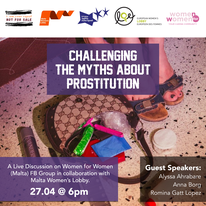 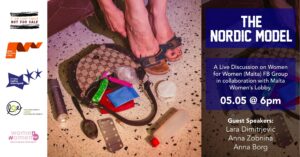